A slipstream is the area behind a moving object in which the wake (air or water) is moving at comparable speeds to those of the object itself. I suppose the guys over at Chameleon Glass decided to name this piece after that because of how it looks. The body and neck of the pipe are very sleek and the color design on the outside of the glass only goes the length of the piece. This almost makes it look like that pipe is moving at breakneck speeds even when it is sitting perfectly still. That or they used one of them and realized that it’s sleek design shot smoke into their lungs even faster than the standard pipe. No matter the reason they decided to go with the name of Slip Stream, this pipe can slip stream its way into your pocket in no time. Simply hit checkout and this piece could be yours! 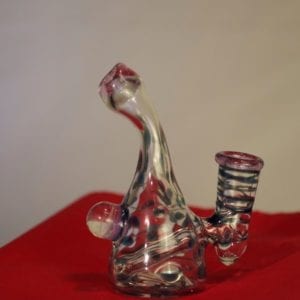